...and it’s oliver stone’s turn to witness my wrath

Has anybody seen World Trade Center, the new movie directed by Oliver Stone about the last two people to be rescued from the debris of the World Trade Towers after September 11?

I haven’t seen the film, but today I uncovered a shocking (shocking!) piece of information about the real people the movie is based on. The two last people to be rescued were police officers Will Jimeno and John McLoughlin, and one of the people who helped rescue them was ex-Marine Jason Thomas. Here is a picture of the actor who plays Jason Thomas, from Wikipedia:

Here is a picture of Jason Thomas from USA Today: 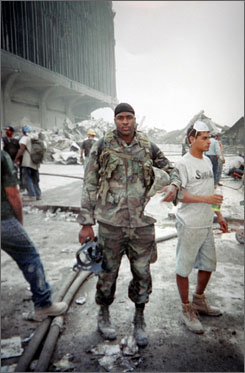 In case the pictures don’t spell out why I’m enraged, William Mapother is white! Jason Thomas is black! Rage! Rage!

I found this info courtesy of the blog Rachel’s Tavern, and who very eloquently notes that the reason why this particular cross-racial casting is inappropriate is because there are so few postive images of black men in mainstream media. While American movie directors have no problem casting black/latino actors in roles of “bad guys” (see the movie Thirteen for proof of this), when they have the opportunity to show a black man doing something amazing and inarticulably valuable for the U.S.A. on a terrible day, they cast a white man.

You can read Jason Thomas bio on Wikipedia here. The movie production company notes that it made a “mistake” in casting a white actor to portray Thomas, but that it was too late to change the actors by the time they realised their mistake.

« Fall is the season for the book geek

“Just, whatever you do, don’t marry a woman with a career.” »