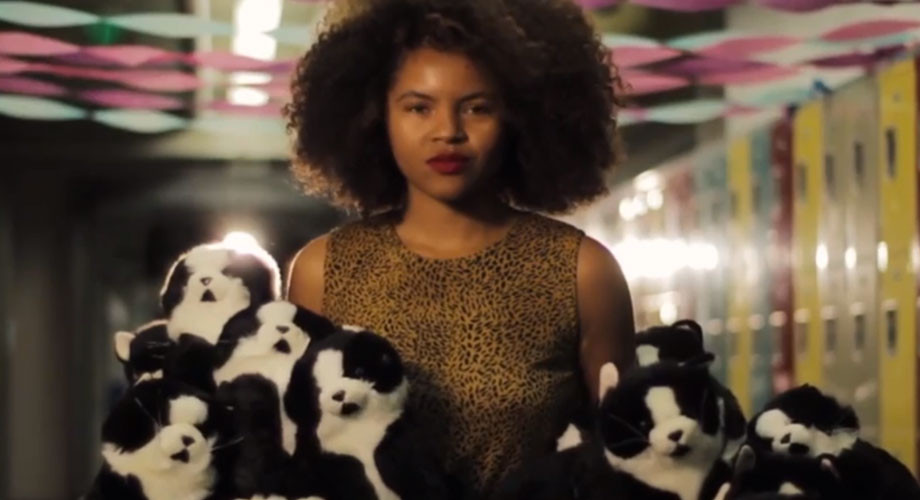 Video still: Catcall for What?

The “Catcall for What” music video was sparked by a group of young women of colour sharing their experiences of being harassed on the street. In this video, young women of colour reframe sexual harassment: the perpetrators of catcalling are no longer the focal point of the story; rather, it’s the strong women who are taking a stand and adding some fun to it (with stuffed cats) who really tell the story.

One of the first poems I ever wrote was a piece on women and media in high school. It was short, it rhymed, and it was all over the place. But I wasn’t one to short-change myself, so I read it at my queer youth open mic, at school, and whenever there was someone (literally anyone!) to hear me perform it.

I found power in my words and in my performance. Poems were my medium at the time, and I used it to talk about social justice, stories that were hard to tell, and to call people to action. I wrote about my budding queerness, being an Asian American woman with a family history of trauma and marital rape, and navigating privilege and oppression.

Though I felt empowered, I soon learned that there were systems and institutions in place to keep me down.

I was headed toward a rally one afternoon, and a group of men that I took to be mid-twenties came onto the bus. They sat uncomfortably close to me. One of them started to stroke my shoulder, pushing down my bra strap, and another reached between my legs and grabbed me, hard. They said all these things about one of them liking me, thinking I was beautiful, and how they really, really wanted to touch me. I didn’t know I was being sexually assaulted at the time. The empowered side of me wanted to reframe the narrative to say that I faced my perpetrators head on, but the truth was that I was too petrified to move. I shrugged their hands off my chest and shifted my legs toward the window, but nothing worked. Eventually, my entire body just shut down. I wanted to keep cool, like it wasn’t affecting me at all, because maybe they’d stop if I acted like they weren’t even close to making an impact. There were so many people on that bus, and no one said anything.

I left that experience with pieces of myself missing, still caught on the bus between what-ifs, a young activist’s defiance, and blatant denial that this could happen to her because she was strong, empowered, and hella badass. I left feeling empty, stripped of any agency I thought I had.

I found ImMEDIAte Justice when I was in the most denial. I walked cautiously into a room with two eager ImMEDIAte Justice staff who welcomed me into their space, listened to what I had to say, and didn’t interrupt me—not even once.

We brainstormed a lot in Tani’s apartment. There were nights we would just watch Soul Pancake videos, cry happy cries, and tried out new ideas: what if we subbed in that giant couch for a giant vagina couch where mothers and daughters could talk about reproductive justice? Or if giant sperm walked around a busy area and asked people questions to educate them on safer sex? We shot and edited videos that spotlighted topics like creative ways to use condoms and childhood sexual assault survivors. Through working with amazing, radical individuals and hearing their stories, I was able to work through my own trauma and internalized oppression.

ImMEDIAte Justice reminded me there are still ways to tell my story, even as I am processing it. My story is still mine to tell, and I can tell it without losing my agency and without feeling bad about myself. I can still shape my narrative as a strong, queer woman of colour breaking gender binaries and tearing down rape culture.

That post sexual assault, silenced and broken part of me… is smiling.

Claudia Chen is a Communication and Rhetorical Studies major at Syracuse University and a queer womxn of color with a passion for social justice, spoken word, and combating domestic violence. Claudia has previously spoken about queer issues on the Dr. Phil show, the Straight But Not Narrow campaign, and in various online articles.

Mid-Week Round Up: February March 18 »