This post features excerpts from Respect In Action’s (ReAct) “End the Silence on Family Violence” zine. ReAct is a youth violence prevention program of METRAC. 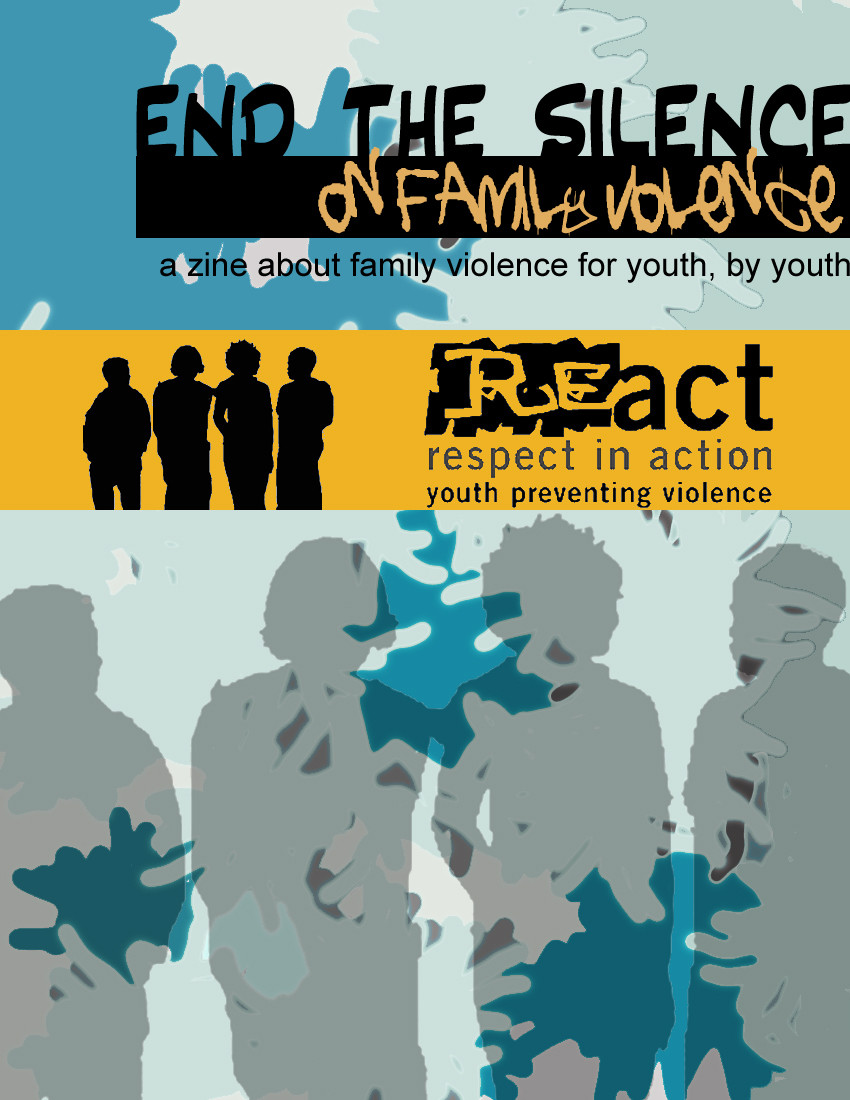 What is Family Violence?

It’s abuse between family members such as parents, partners, siblings, grandparents, stepparents, stepchildren, aunts, uncles, and cousins. Since family violence often happens behind closed doors between people who are related or live together, it isn’t taken as seriously as it should be. But it hurts people and no one should have to live with it.

Family violence can be …

Emotional: criticizing, insulting, or making fun of someone; making them feel worthless; treating them like crap; ignoring or stalking them; disrespecting their spiritual beliefs; threatening to tell their secrets; manipulating them to get what you want

Physical: hitting, pushing, kicking, pulling hair, or biting someone; holding them down or controlling their movement; not taking care of them when they depend on you; forcing them to take drugs or drink; driving fast or breaking stuff to scare them; threatening to hurt their kids or pets to control them

Sexual: any unwanted sexual behaviour, such as forced kissing or touching, incest, rape, threatening or manipulating someone to make them do sexual things, forcing someone to watch something sexual

Financial: stopping someone from getting money to control them; not letting them get a job; harassing them at work or forcing them to miss work; taking their money; forcing them to pay for all the expenses; making them rely on you for money

Woman abuse: any abuse of a woman, often done by a male partner (e.g. husband, boyfriend).

Child abuse: abuse of children or youth, done by an adult.

Sibling abuse: any abuse between brothers/sisters or stepbrothers/stepsisters.

Elder abuse: any abuse of older people, often done by family members who are younger than them.

Violence is about power - it happens because some people get more respect than others in society. They can do what they want and stop others from doing the same.

How can I help?

Family violence happens a lot. Chances are that we all know someone who has gone through family violence. Sometimes it’s someone close to us. It’s hard to know what to do when someone tells us about being abused at home. But here are some things you can say.

Survivors of family violence are told it’s their fault when they get abused. They’re blamed for it. So listening to them and not judging them can really make a difference.

Nobody deserves to be abused. Telling them that they didn’t deserve it well help them understand that there’s no excuse for the abuse they faced.

It’s sad, but people are abused all the time. You can let them know that there are lots of people who have been through similar struggles and survived.

You can comfort them by telling them you’re sorry they were hurt. And it’s okay to feel sad and upset that someone close to you was abused. You can get help or talk to someone you trust (still keeping it confidential) to take care of yourself too.

Don’t force them to get help, but let them know that when they’re ready, you’ll do what you can to help them find support. Check out the last two pages for places you can call or go to for help.

Andrea Gunraj is Communications Specialist at METRAC. She helped start the ReAct youth program as a summer student in 2001, and later, she helped write this zine. Andrea loves being involved in interesting projects to prevent violence, especially technology projects. She’s a fiction writer and musician and believes everyone should have access to tell their stories and learn any musical instrument they want.