Fat Girl at the 5K: Five truths for runners and walkers of size 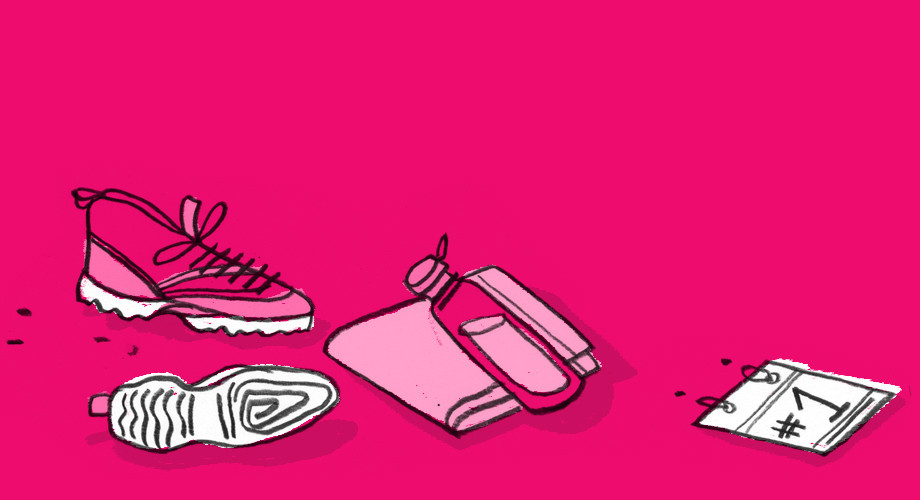 I’m fat. I like to do 5Ks. Specifically, I like to racewalk. I haven’t been able to run since I was an anorexic teenage dancer, due to asthma and arthritis in my knees (read: not because of my weight), but I can clock in a reasonably fast walking mile. I’ve always loved to walk and try to do it every day; since 2011 I’ve also been participating in many organized races.

Running and racewalking are more inclusive for fat participants than many other sports, at least on some level. While many folks choose to turn races into social events and run with their friends, for many others, it’s a very solitary pursuit. The other runners aren’t really particularly concerned about you or what you look like, because they’re focused on their own game.

However, as in just about everything, sizeism does creep into running culture in major ways.

1. I’m likely to be completely ignored at the race expo.

At most races, there’s an expo of some sort – an exhibition with numerous vendors’ booths. The exhibitors usually include everything from local sports teams to charitable organizations to running apparel. Often, other races have tables at the expo and offer discounts for anyone who signs up on the spot. Sometime the expo is tiny and only a few vendors are present; sometimes it’s so massive that it’s held in a convention hall. Most of the time the expo is set up at the start or finish line of the race. At some large events, however, participants attend the expo a day or two before the race, at the same time they collect their racing bibs.

I’m always excited when races have large expos. I am genuinely interested in finding fun new products that can help me with racewalking and life in general. However, many exhibitors at expos aren’t exactly excited to see me.

In particular, there’s a 95% probability that if I approach a booth advertising another race, I’ll be completely ignored. The reps often won’t even make eye contact with me; they’ll keep texting, talk to each other or simply look away, even if I’m clearly reading the registration information or trying to get someone’s attention. In contrast, when thin runners approach, they will usually immediately perk up, turn on the charm, start talking about the race and offer discounts. I remember one incident where a booth worker actually yelled directly over my head to attract other runners instead of talking to me.

There are a number of races that have been permanently crossed off my “to-do” list because of the way their representatives have treated me at expos. On the other hand, the race reps who have taken the time to talk to me respectfully have ensured that I’m going to participate in their events as often as possible.

Food and drink booths are also sketchy. The reps at these tables usually don’t want to bother with me. The rationale, I suppose, is that since I’m fat, I obviously must not care about good nutrition. Ah, these stereotypes! And if there’s a sample being offered? Well, eating anything is a taboo for fat people, so I’m not received politely most of the time. I remember one expo where the runner in front of me was given about six sample packets of a snack product. When I approached, the rep scowled and made a show of selecting one packet for me.

If they’re offering a unisex shirt, I’m good to go. However, whenever I hear that a race has “women’s cut” shirts, I inwardly cringe, because I know it won’t fit me. Sizing on fitted shirts is notoriously inconsistent, and a lot of “women’s cut” t-shirts are actually made in the same dimensions as children’s sizes. A fitted shirt marked “extra-large” might only be as big as a unisex small or medium. In addition, since they’re usually only offered up to that incorrect XL, it’s impossible to get a size that fits. I’m not the only one who has issues with this—since the dimensions on these shirts can be so small, taller women and anyone with a larger bust or hips might have trouble with them too.

Larger men seem to do better when it comes to race t-shirts. Unisex or “men’s” t-shirts are routinely offered at races in sizes up to 2X, and they’re made for adults. I’ve never seen a heavyset man at a race have a problem obtaining an event shirt that actually fit him.

Many races will simply hand you whatever size/type of shirt you ask for, but at others, they make t-shirt exchanges into a major production. You have to take the shirt that doesn’t fit and stand on a long line to exchange it at another table, which cuts into race preparation time. 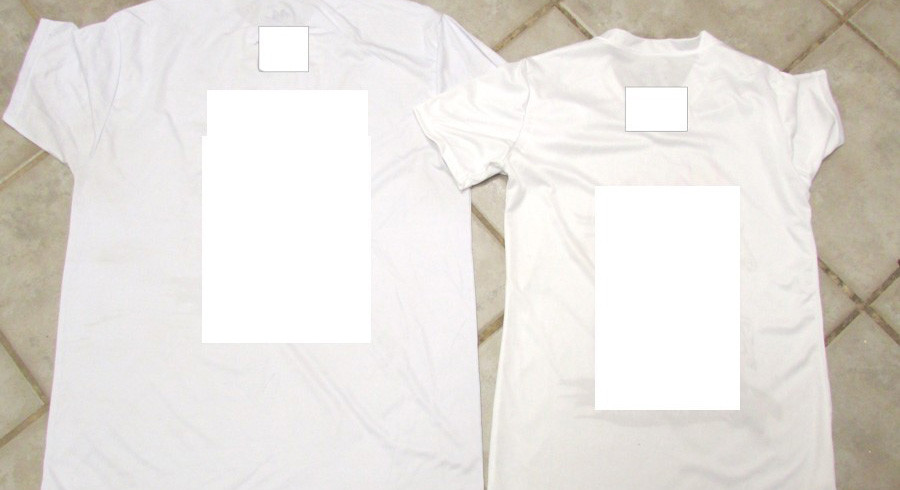 Men’s and women’s XL tech shirts from the same race. The race logo has been redacted.

3. Every now and then there will be open fatphobia.

Fatphobia in running crops up when and where you least expect it. For instance, a few years back I did a fun run at a county fair in a city I was visiting. The course went right through the fairgrounds, and the runners were able to stop to take free rides down the giant slide, play carnival games and pose with plush animals on the stage of the adjacent amphitheater. It was one of the most enjoyable, silly races I’d ever done.

And then I took a good look at the finishers’ medal and t-shirt. The artwork was adorable, and depicted several smiling children and anthropomorphized food items running along. However, there was also a frowning, flushed, overweight boy who was sweating profusely and lagging way behind the rest of the characters. The child’s body type was obviously germane to the image; they went so far as to dress him in ill-fitting clothing that showed his large belly. The numerous people who were involved in drawing, designing and approving this cartoon apparently didn’t think that it was insulting or alienating to people of size. Or else, they didn’t particularly care. 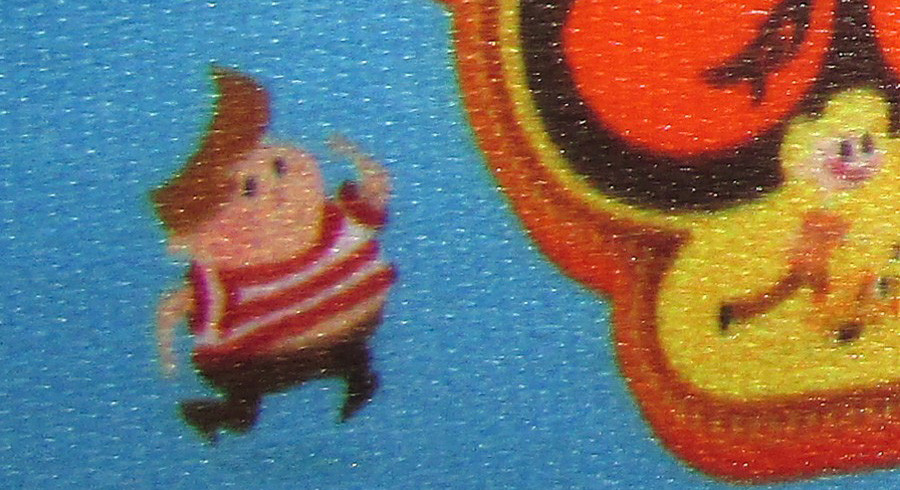 I’ve taken to wearing my race t-shirts when I see my doctors. I’ve seriously considered bringing in my scrapbook of race bibs or my clutch of medals, as well. Why? If you’re fat, people don’t believe you when you tell them that you exercise. I’ve had incidents with doctors where I’ve told them how many miles I clock in a week, and how much dancing and toning I do (I try to put in at least an hour of exercise every day, and my regimen includes cardio, stretching and toning) only to have them tell me five minutes later that I should really start exercising, even if it’s only 15 minutes a day. They tune out completely or they think I’m lying to them.

Some people who aren’t physicians react similarly. There’s a particular expression of incredulity – really? combined with a rising inflection – that crops up again and again.

I don’t race, dance or exercise to impress anyone. I do it because it feels good, it cuts my stress levels, it allows me to express myself, and it’s fun. All the same, it would be nice if the doubters around me would actually believe me when I spoke.

5. When they do believe me, they think it’s a weight-loss bid.

There’s a corollary to the “fat people don’t exercise” myth: if you see a heavyset person working out, they’re obviously trying to lose weight. And they probably just started, because those who exercise on a regular basis can never be fat. I always wonder how they factor all those large professional weightlifters and baseball, football and cricket players into that hypothesis.

Society still hasn’t gotten its head around the whole concept of being “fit and fat,” or the idea that someone who is heavyset might actually have a regular exercise program that has nothing to do with a desire to be a size 0.

I exercise because I like it. I’ve been dancing since I was 2 ½, and it’s been my solace and outlet in a lot of different ways. There are a lot of quantifiable potential benefits to exercise, from helping strengthen the cardiovascular system, muscles and bones, to reducing stress, to generating endorphins. Weight loss isn’t a consideration for me.

All in all, 5Ks are a tremendous amount of fun. I do hope, however, that one day they will be entirely inclusive and tolerant.

Denise Reich dances in media events and does 5Ks. She has won several medals for racewalking. Her writing has been published in Canada, the USA, Bermuda and elsewhere. 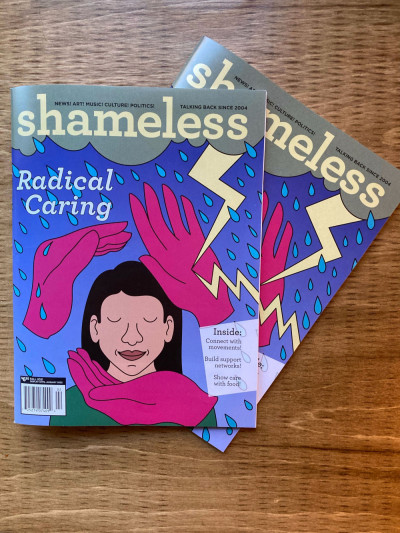