Most feminist-leaning young women who grew up in the 90s have a special place in their hearts for the 1996 cult hit The Craft. For every girl who played “light as a feather, stiff as a board,” who wished they could use magic to end the bullying they suffered at school, there was The Craft. So when my best friend suggested I rewatch it as potential Halloween costume inspiration, I had my doubts; I seriously wondered if the perfect memory I had of the movie could hold up to my current critical politics and tastes, and if I wanted to risk tainting it. But I bit the bullet last night when a friend and I lit some candles and pressed play. For those uninitiated few, here’s the basic plot: teenage Sarah (Robin Tunney) moves to LA with her dad and stepmom. She starts off her high school career on the wrong foot by committing the cardinal sin of not wearing a uniform to her first day at Catholic school, which helps her get noticed by the official School Douchebag Chris (Skeet Ulrich) and by the slightly goth-looking outsider girls. The movie is, of course, about these outsider girls: Bonnie (Neve Campbell), Rochelle (Rachel True) and the ringleader with attitude in spades, Nancy (Fairuza Balk). After the warnings they give Sarah about the School Douchebag and his not so noble intentions end up coming to fruition, she is quickly taken under their wing as “the fourth.” Nicknamed the “Bitches of Eastwick,” the girls are ostracized and mocked by their peers, which only helps them bond over their individual miseries, complete with a shared interest in witchcraft.

Considering The Craft is a fluffy Hollywood teen movie, the film dabbles into some heady territory, touching on issues like suicide, racism, rape, death, domestic abuse, bullying, and of course, witchcraft. But the problem is, it never really goes into depth with any of them, and ends up reinforcing the status quo. Let me explain:

SPOILER ALERT When the girls start becoming friends, the audience is drawn into their friendship and struggles in a very relateable way: Bonnie has low-self esteem because of (unexplained) scars, Rochelle is the subject of racist bullying, Nancy is dealing with living in an impoverished abusive home, and Sarah is recovering from a suicide attempt. As soon as Sarah decides to open up to these girls, telling them about her mother dying while giving her childbirth and what her deepest fears are, we are made to believe they are getting closer. In fact, soon enough, we realize all of these confessions will be used against her. And what teenage girl hasn’t experienced something like that? And what teenage girl hasn’t wished she could use magic to put an end to all of the shitty things she has to endure?

Nancy, who by all means is a powerful, intelligent, badass character, ends up losing her shit when she is accused of being jealous. Jealousy is the most dangerous thing in the entire film. And in the end, that is what the story of The Craft is; if you have natural magical powers, have a rich dad, and are beautiful and desirable, then of course the uglier, poorer girl will just be violently jealous of you and bully you to death. Don’t take my word for it, watch it yourself. The girl on girl hate in this film is overwhelming, especially in the last ten minutes of the film. It sucks.

To make matters worse, the film’s promotion was a sort of Spice-Girls-meets-Wicca angle, when it reality there is no “girl power” to be found. At least for the Spice Girls, friendship never ended and they put hos before bros…

To put it simply, the biggest problem with this film is that it pits the blame of who is “bad” in these teenage quarrels and quandries on individual people, not on the various systems of oppression. Rochelle is being bullied about being a “negroid” by a “bleach blonde bitch,” and the punishment the bully receives via witchcraft is… losing her hair. There is no addressing of why the bully might be racist, and what she might personally have against Rochelle, or what a productive “real life” solution could be. While you might think The Craft could possibly be edgier, or perhaps more critical because it is about witchcraft, it’s really as formulaic as a teen Hollywood movie can get. 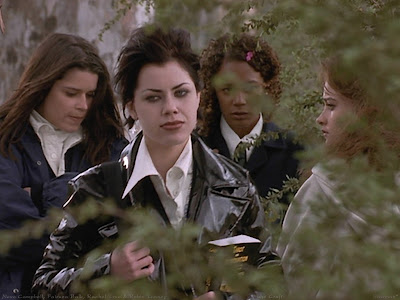 This is not to say the film is terrible and that I’ll never watch it again. On the contrary! My own teenage memories of it were empowering. I even remember that when I first heard “Rebel Girl” by Bikini Kill, I imagined it being written about someone like Fairuza Balk’s character, Nancy. Today, however, I see the film as filled with shitty slut-shaming ideas and a poorly written script. In my opinion, it is a terribly made, awesome movie. When it comes to its content, it’s all in how you look at it.

Which leads me to posit this: I wonder what an independent production about teenage girls dabbling in witchcraft written and directed by women would look like. The great thing that truly stood out to me upon rewatching, putting aside the ending, is how a lot of it is up to the viewer’s interpretation. I still love the character of Nancy, even though I realize now that her portrayal is really fucked up. Seriously! How can I not? I’ll always have a special place in my heart for someone who would protect themselves, their mother, and their friends from sexual harrasment, violence and abuse.

For nostalgia’s sake, and by the powers of Manon, I give The Craft 3/5. Do not enter this film without a critical mind, though.

What did you think about the movie when you first saw it, and how has your opinion changed over the years? Do you know of any other 90s teen witch movies you’d recommend to fans of the craft that has a better take on girl gangs and/or witchcraft?

« Shameless at Word On The Street!