Girl in a Band: Kim Gordon and Memories Recalled 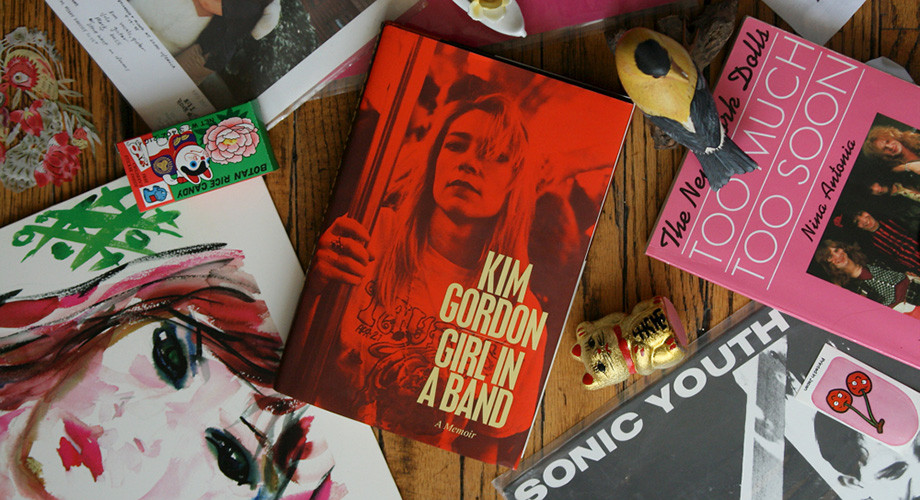 It’s 2011 and I’m out eating dinner with friends. The word on the street, or at least on the table, is that Kim Gordon and Thurston Moore, the founding members of Sonic Youth, a band of 30 years, a marriage of 27, are splitting up. I’m not sure what sort of relationship my tablemates have with the music of Sonic Youth, which released its first record around the year we were born, but it doesn’t feel like the right time to ask. More importantly, it doesn’t really matter. Even if they didn’t have the iconic Sonic Youth patch (white font, capitals, leaning to the right, underlined) stitched on their bag in high school, even if they couldn’t name the tracks on any given Sonic Youth record, my dinner mates could no doubt appreciate the band’s monumental significance for indie music and their status as one of the most important cultural happenings of the Eighties and Nineties.

The consensus at the table that night in 2011, in the blogosphere, in the world, was one of shock—the marriage ending maybe more so than the band splitting up, not just because one is clearly the cause of the other, but because bands are expected to break up, while couples made up of people who are as awesome as the people who made up Sonic Youth supposedly aren’t.

Last month, Kim Gordon, singer, bassist, and guitarist in Sonic Youth, as well as artist, writer, and actor, released Girl in a Band: A Memoir (Dey Street Books). At the time of the dinner, when talk of the split dampened everyone’s appetite, I remember cringing at the thought of the blogosphere’s impending guessing game as to the reasons for the breakup. I thought of this specifically because Gordon, in interviews, in the gaps between live songs, in photographs, has rarely offered much information about herself. The epithet so often applied to women, intended to explain away anyone that doesn’t give you what you want—“cold”—was frequently thrown around with regard to Gordon. Sometimes “cold” was just “cool,” which I found less offensive. Maybe Gordon was just too cool to smile (I, for one, having made her the model of what one should be, found that pretty cool). In interviews, Gordon often appeared in big sunglasses, her answers short, delivered in a monotone, almost performance-art-odd. I think the best ever response in music history was given by Gordon, when she said, flatly, “Electricity” in answer to the interviewer’s question about her favourite instrument.

Gordon’s reticence is definitely still at play in the memoir. Girl in a Band is hardly a revelatory tour of the dark nooks of Gordon’s soul. Despite what the title might suggest, it also contains no extended study of female presence in an all-male band or even of Gordon’s feminism (on this Gordon offers a little, but having grown up looking to her as a feminist icon, I’m always hungry for more). Picking up the book and reading its dust jacket, I was alarmed by what appeared like the publisher’s cheap marketing ploy—Gordon and Moore have separated, the copy read: “What did this mean? What comes next? What came before?”— as if the split were the measuring stick against which Gordon’s life was to be explained, the sun around which everything else revolved, and the hook that would snag gossip-loving buyers.

Reading the book, though, it became clear that a memoir written so soon after what happened would inevitably be steeped in the pain of those recent events. Memories require triggering, whether conscious or unconscious—they’re never recalled in a vacuum. The opening section of Gordon’s memoir is titled “The End,” and it is the end of Gordon’s marriage that in a large way informs a lot of her recollections—in particular, those surrounding her relationship with Moore, both in and outside of SY. The dust jacket copy stopped seeming so wrong.

Girl in a Band is of course about more than just the end. Gordon—who was heavily involved in the art world, first in Los Angeles, where she grew up, and then in New York City, where she moved in the Eighties—provides a picture of these bustling scenes and their particular moment in history. Then there are Gordon’s many projects outside of SY, like her band Free Kitten (with Julie Cafritz of Pussy Galore), her clothing line X-Girl, and her acting career. While it’s no secret Gordon is celebrated for her involvement in some pretty cool things, that she is inarguably (as the dust jacket also tells us) “the epitome of cool,” reading Girl in a Band made me think of something that would have been a killer essay topic for a biography class I once took: How does the moment when we choose to compose a memoir affect its content and tone? How would Gordon’s memoir sound if written ten years from now, or five years ago?

Heads of State often write a memoir after completing their term in office. No doubt a publisher wants an autobiography at the point when the most media attention is turned to its subject. In Gordon’s case, that moment was 2011 and the years that immediately followed. The work that has resulted from those post-2011 years was that of a writer rereading her life, seeing things for the first time, or more clearly at least, indulging in the act of reassessing, standing at the foot of a turning point, a betrayal. This comes across not explicitly, but more so in the mood that looms over the memories as they are described, start to finish. The final product is less moments-recalled and more snapshot-of-moments-recalled—it is a picture of Gordon at a very definite juncture in her life and career. What the snapshot captures is her uncertainty, her recognition of her vulnerability, and a certain bitterness over that vulnerability’s presence—and all this makes Girl in a Band a very personal work.

Girl in a Band is definitely not a Sonic Youth biography—Gordon says that plenty of books have been written about the band and her aim is not to add to the corpus. It hardly requires readers to be familiar with the band’s music, and is definitely not a fans-only read. With the recent resurgence of interest in the 90s music scene (cemented when Nirvana t-shirts went on sale at Top Shop) Girl in a Band will certainly be of interest to anyone who wants to learn more about one of its most important—and, if I haven’t stressed this enough, coolest—figures. Really, this book is for anyone who wants to know more about the woman who in Sonic Youth’s “Kool Thing” video, says, “Hey Kool thing, … Are you gonna liberate us girls from male, white, corporate oppression?” while snuggling a kitty and swinging her body round like a wild twister in a changing getup of glitter, PVC, and feathers.