Not your ‘Fashion Dots’: The Continuous Appropriation of Bindis

In the latest slew of North American women pop stars to don the bindi, white-passing Selena Gomez clocked in at number 10 for her MTV Movie Awards performance of “Come and Get It.”

While it can only be assumed that Selena probably didn’t think this move through, the question remains as to why popular pop stars such as Alicia Keys, Katy Perry, Shakira, Gwen Stefani, Miley Cyrus, Madonna, Nicole Scherzinger, Iggy Azalea and Azealia Banks have worn the bindi at some point in their careers as a fashion statement. 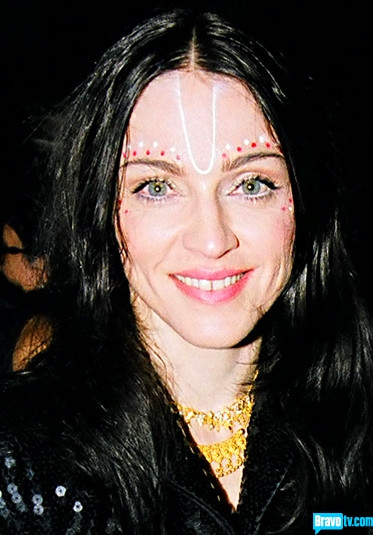 In spite of the countless number of texts written by South Asian bloggers on why wearing the bindi while not being of South Asian origin is a terrible thing to do (due to its ignorance of how histories of racist exclusion, colonial violence and mistreatment have impacted South Asian settlers), people keep….doing it.

When a non-South Asian person wears the bindi, it is generally seen as edgy and cute. Fans and music media alike praise these celebrities for their bold “fashion” choices. But when someone like me or my mom wears the bindi out in public, we are either stared down with dirty looks, told to go back to where we came from, or exotified as having magical qualities.

For my mom and me, it’s a mark of our otherness, a reminder that we don’t belong in this country and never will – unless, of course, we assimilate and leave our cultural symbols behind. Now that is what the dream of becoming a Canadian citizen is supposed to mean: having your culture sold as fashion statements and themes for dinner parties.

This is called cultural appropriation, which refers to the act of stripping a cultural symbol, whether it be food, clothing or social behaviour, from its original culture and applying it to the practices of a different cultural group.

And why should you care about the effects of cultural appropriation? Why would it matter since it doesn’t physically hurt anyone? Why does it matter?

Before Miley Cyrus tried on aspects of black culture, she was trying her hand at Bindis http://hexgrrrlfriend.blogspot.ca/2012/06/why-you-yes-you-should

It matters because the tendency to appropriate is grounded in an assumption that history does not impact the present and that Canada is an equitable, “multicultural” setting where everyone’s culture exists to be shared and tried on like items in a clothing store.

It matters because there is a brutal, racist history of South Asian settlers in Canada and the US being grossly mistreated for wearing their cultural clothing and not assimilating into colonial culture quick enough.

Personally, whenever I see a non-South Asian person, most often a white person, wearing the bindi as a “fashion dot,” I think of the analogy of killing an animal and wearing its fur as a luxury fashion item. It’s a very visually violent thing to see, and it reminds us that the animal was only useful for its skin.

As someone of a South Asian diaspora, I am reminded that Western people can only perceive me through South Asian stereotypes, and not as I actually am.

I am reminded that I am only useful to Western society for the “colourful culture” that I bring with me. That I can only ever be valuable as an investment or an addition when I am reduced to what western people know about my culture.

I am reminded of the fact that as a little kid, the amazing food my mom and dad would make for me to eat at school would be disgraced and insulted by white kids as stinky, smelly and gross.

I am also viscerally reminded of the fact that the only time South Asian people can practice being South Asian in public is when there is a multicultural day/week/month or a news outlet is covering a community event that a politician has to be at for public image brownie points.

Brown people are not your ornaments.

We are not there to entertain you based on what knowledge you have of South Asian music and Bollywood movies. Brown people don’t exist to teach you about yoga or meditation, spirituality [fuck you, Elizabeth Gilbert!], vegetarian cuisine or the kama sutra. We don’t exist to make you laugh at the way we speak English. Our accents are not a comedy motif, despite what Russell Peters has told you.

We definitely don’t exist for you to do a heartfelt series of feature presentations on what you think the issues facing our people are. [Looking at you, Oprah Winfrey and all of National Geographic since forever.]

The wrongful attitude that believes that it is all fair and okay to wear parts of people’s cultures (dreadlocks, reggae music, bindis, kimonos, saying kawaii, samosas, saris) because cultures exist to be shared is ridiculous and violent, because it’s directly rooted in a sense of imperialist and colonial entitlement to all cultures.

It’s whiteness thinking that it has universal access to all people of colour and their cultures.

While some don’t see it as harmful, I feel that for white and Western people, this uninformed belief has very deep consequences, as their unconsciously conditioned expectations of privilege compromise their own free exercise of will.

So the next time you feel an urge to wear a bindi, DON’T.

Tags: decolonizing, in my opinion..., media savvy, race and racism