The Mayweather Spectacle: What the ‘Fight of the Century’ Tells Us About Violence Against Women 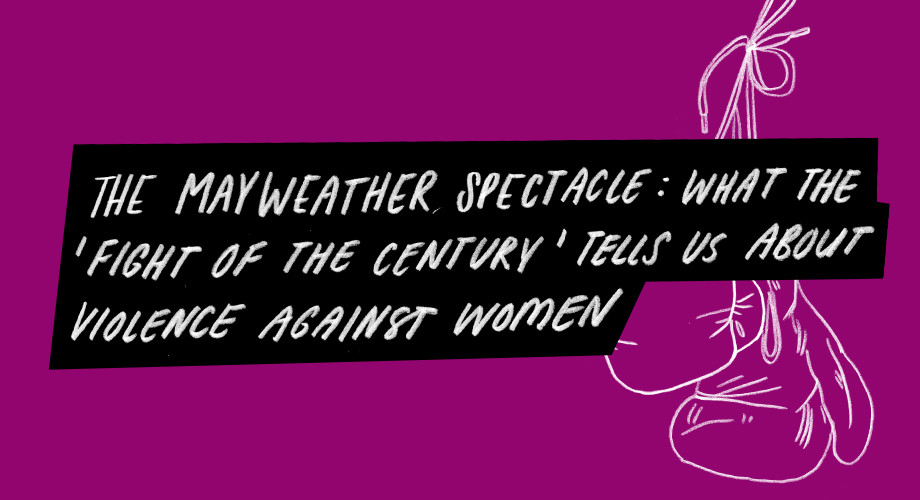 On May 2, 2015 McCarran airport became “the richest runway in the world” as roughly 100 private planes totaling $1.5 billion in value lined the Las Vegas airport tarmac, wing to wing. The event that drew unprecedented crowds, temporarily closing the airport, was the Floyd Mayweather Jr. and Manny Pacquiao fight at the MGM Grand.

In 2002, Mayweather was found guilty on several counts of domestic violence and battery.

In 2004, he was found guilty, again, on two counts of battery against two separate women.

In 2010, his then girlfriend Josie Harris filed a domestic abuse report. Harris had already previously reported Mayweather in 2005.

In 2011, Mayweather’s child abuse went public. He pleaded no contest.

In total, Mayweather has been arrested seven times for abusing five different women.

In a culture that celebrates violence, promoting a narrow definition of hegemonic masculinity, predicated on aggression, power and dominance, it comes as no surprise that Mayweather remains the biggest name in boxing. What does our obsession with Mayweather tell us more broadly about the cultural acceptance of violence, particularly violence against women?

According to the Canadian Women’s Foundation half of all women in Canada have experienced some form of physical or sexual abuse. Every six days a Canadian woman is killed by her partner. In 2010 intimate partner violence increased by 20%. (To read more about violence against women in Canada you can visit the Canadian Women’s Foundation’s ‘Facts About Violence’).The normalization of violence against women can be attributed, at least in part, to the glamorization of violence in celebrity and sports culture. Feminist research has consistently exposed the correlation between the construction of hypermasculinity in sport and the devaluing of women’s bodies and autonomy. Television acts as a barometer of social relations – it gives us cues as to what is, and is not, justifiable; the televised celebration of Mayweather in a sold-out 16,800 capacity arena conveys an indisputable message: celebrity spectacle supersedes women’s safety.

Jackson Katz, author of Reconstructing Masculinity in the Locker Room, suggests that to counter a culture of gendered violence we must “challenge and reconstruct predominant male norms that equate strength in men with dominance over women”. Not only must men be held accountable, but there needs to be a significant shift in how we (re)define the parameters of acceptable masculinity. Calling out Mayweather’s history of abuse is one way to challenge the overwhelming acceptance of domestic violence in Western culture. Mayweather’s next fight is scheduled for September, 2015. I’ll be tuning out – and you should too.

Why the Jem Trailer makes me sad »