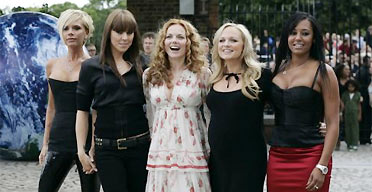 Earlier this summer, I was gripped by an outpouring of love so unexpected and powerful that it was bewildering - when I heard that the Spice Girls were reuniting. I called up my best friend from high school close to tears, it was the first thing I told anyone I knew when I ran into them, I sang 2 Become 1 until my friends threatened to lock me in my room.

But it’s not like I was the world’s biggest Spice Girls fan when they were actually cool. I never bought any of their albums, I rolled my eyes in disbelief at girls who wore “Girl Power” t-shirts, and I pretended not to know any of the words to “Spice Up Your Life” (I knew all of them). In fact, I didn’t know anyone when I was 16 who would’ve admitted that they liked the Spice Girls.

Could it be that you don’t know what you’ve got till it’s gone? The Spice Girls with their flamboyant, cheerful destruction of any oppressive authority, their emphasis on fun, their declarations of their own powerfulness, their sunny irreverence, their emphasis on community, and their odes to friendship seem like definite proponents of feminism.

I think my nostalgia for the Spice Girls, and my excitement at their reunion has to do with the fact that today, it seems like anything remotely feminist could never be a pop cultural movement. Our top female pop icons today are the Pussycat Dolls, who seem to confuse empowerment with objectification, Brats dolls which encourage 2 year-olds to make themselves sexually appealing to hetero men, and Avril and Carrie.

Even the fact that the Spice Girls each had distinct personalities (something that at the time seemed like a gross marketing ploy) at least distantly connected to their actual personalities differentiates them from contemporary girl pop stars. Be honest, if Katharine McPhee and Suzie McNeil were standing side by side, wouldn’t you have a leetle trouble telling them apart? Girl stars these days are generally portrayed as identical, glossy-haired, boy-crazy girls-next-door - even if their offstage antics make it easy to tell who’s who (see Lindsay Lohan and Hilary Duff for example).

But in their heyday the Spice Girls were accused of co-opting feminism just to sell records, mostly because they acted foolish and emphasised being pretty. I can’t help but feel though, that the Spice Girls made the message that girls can be powerful and valuable in their own rights available to girls and women who might not otherwise hear it. Feminism is often seen as reserved for university-educated, middle class white women (hence Miss G___’s attempt to liberate it from the Ivory Tower_). And in many ways it’s not easy for women who feel uncomfortable in predominantly white, middle class spaces to embrace feminism. I know that I didn’t want to have anything to do with feminism until I was way into my 20s.

The Spice Girls, on the other hand, were accessible to anybody within range of a TV or radio, almost anywhere in the world. In a recent Addicted to Race podcast on Feminism and Women of Colour (recommended for both white feminists and women of colour feminists alike), Latoya Peterson revealed that the Spice Girls were what got her first hooked on feminism. I even have a friend whose coming out story features the Spice Girls in a starring role.

I don’t know, is my over the top enthusiasm for the Spice Girls, on the basis of their feminist power, sign that I’ve gone senile? Does anyone else here love the Spice Girls like I do?

In any case, I know that what I really really want is a ticket to their Toronto show…

Tags: in my opinion..., playlist